The history of Osmosis

Osmosis, from the Greek ôsmos, meaning "push, impulse" was discovered in 1748 by the physicist Jean-Antoine Nollet. From this discovery, researchers at the University of California at Los Angeles decided in 1948 to study the osmotic properties of cellophane, a transparent film of cellulose hydrate. These studies led to the discovery of reverse osmosis, which was originally exposed as an evaporation phenomenon.

The evolution of reverse osmosis systems has been driven primarily by the advancement of membrane technologies. Being at the center of the systems, the membranes have a critical impact on permeate quality and flow rate. Despite the focus on membranes, related improvements to reverse osmosis systems have emerged. The use of higher quality components such as more powerful and energy efficient pumps, more durable piping and oxidation resistant materials have allowed RO systems to be integrated into the pharmaceutical, food, semiconductor, and many other industries.

Over the years, several types of membranes have been created and tested. Polyamide membranes, an asymmetric polymer, were first developed in the 1970s and are still in use today. Then, the arrival of the Filmtec type membranes, built with an interfacial polyamide composite, was a cornerstone towards the reverse osmosis we know today. More recently, we have seen the advent of Thin-film membranes.

In short, the great diversification of membranes has led manufacturers to categorize them into families. Here you can find  a summary presentation of the different membranes offered by Suez.

Its beginning in the industrial world

The first work on reverse osmosis was carried out at the University of California in Los Angeles a few years after the Second World War. During this time of great demographic expansion, California had to face the decrease of its drinking water reserves and that is why these studies were initiated.

Although this research was not successful, the results allowed, some years later, the development of reverse osmosis systems and the diversification of their uses. The first RO system was used for industrial purposes in the fiberglass manufacturing industry. Shortly after, Aerojet-General Corporation experimented with reverse osmosis to operate a pilot plant on seawater and brackish water sites. Over the years, reverse osmosis water purification systems have found their way into a wide range of industries such as pharmaceuticals, food & beverage, mining, and many others!

Whether it is to purify water for the pharmaceutical or semiconductor industry, to concentrate juices in the food industry, to desalinate water or to treat wastewater, reverse osmosis always works on the same principle: the application of a pressure higher than the osmotic pressure on any liquid in order to force it to cross a semi-permeable membrane

Despite the "simplicity" of the reverse osmosis principle, which is the application of pressure to force liquid through a semi-permeable membrane, the type of design, components and materials have an impact on the entire system and on the quality of the permeate. However, considering only the components of reverse osmosis and not prefiltration or post-disinfection, the components with the greatest impact on reverse osmosis water treatment are the pumps and membranes.

Pumps and booster pumps are responsible for creating or increasing the pressure within the system. The required power of pumps varies depending on several elements. When a reverse osmosis water treatment system is manufactured, the pumps used will be selected based on several criteria. The most important are efficiency, speed and compatibility with the system. 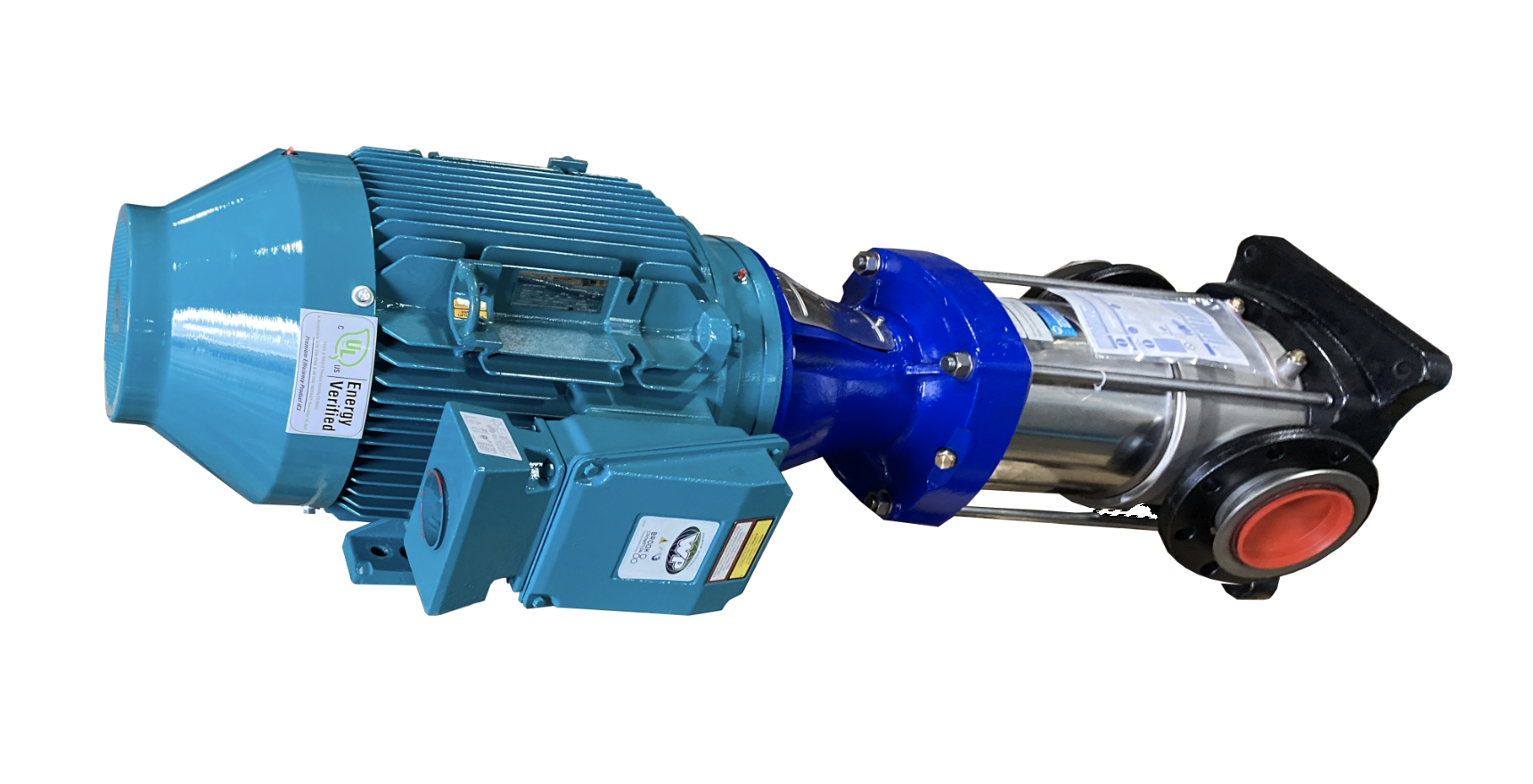 The importance of knowing the pump's efficiency helps to optimize the system's operating costs. Pump speed may seem frivolous, but poor pump optimization can have a negative impact on permeate quality and system longevity. For example, when treating a corrosive liquid, such as seawater, a low RPM pump is recommended since a higher rotation speed will accelerate the corrosion or erosion process activated by seawater.

Secondly, in order to avoid problems and shutdown, choosing a pump made of material compatible with the different liquids treated ensures its durability since, depending on the different liquids and their composition, certain contaminants may affect some types of pumps more than others. Again with the example of seawater, a reverse osmosis system designed for water desalination should have pumps that are resistant to corrosion, so choosing a material such as 304 stainless steel would be necessary.

The supply of liquid that arrives in the system begins by entering the pumps to exert a constant pressure in the system. Once this step is completed, the water is distributed to the different housing where the membranes are located. Once in this compartment, the liquid will circulate in the semi-permeable membranes to separate the permeate from the concentrate.

There are several types of membranes, but most of them are very similar to each other. Thin-film composite (TFC) membranes are made of three sheets that are layered on top of each other before being rolled around a central tube. The first sheet is covered with three layers: the bottom layer is usually a polyester base, the second layer is a microporous polysulfone, and the last layer is a polyamide microbarrier with an approximate thickness of 0.2micron. These three sheets are then combined with a spacer to prevent turbulence while providing space for liquid flow. Finally, a permeate spacer is added to the membrane sheet to allow the permeate to flow smoothly through the membrane.

Once in the membrane, the liquid will travel in a circular way and all that enters the central tube will be the permeate, which is purified water. The remaining liquid will be a concentrate that will be rejected in the case of water purification or used in certain cases, such as for juice concentration.

Its rapid evolution, continuous improvement, and almost limitless capabilities have made reverse osmosis an extremely popular technology in many industries. In sectors such as pharmaceuticals, reverse osmosis systems are often accompanied by pre-filtration and subsequent filtration/disinfection. This is the case since the pharmacopoeias have very difficult purity standards to reach and require other types of technology. However, reverse osmosis alone is known to remove protozoa, bacteria, viruses, and many chemical contaminants such as metal ions, calcium, potassium and many others.

As you understand, this is only the tip of the iceberg on the subject. For the development of this type of system, there are many other parameters to take into account. In addition, to achieve the desired objectives, studies must be carried out in order to define in detail the different needs of a company. By carrying out studies, the enterprise can respect governmental and environmental standards, face the particular contaminants that can be found in the liquids and find solution to any other specific situation.

We hope this article has enlightened you on the specifics of reverse osmosis and its capabilities. If you have any recommendations or questions, do not hesitate to write to us!


How to disinfect a pharmaceutical water purification system